the cry of strange birds (


What is Attack on Titan? It is an anime! It is also called Shingeki no Kyojin but the title card in the show says Attack on Titan, okay, you don't need to stick to the Japanese here, it is literally spelled out for you. But anyway. 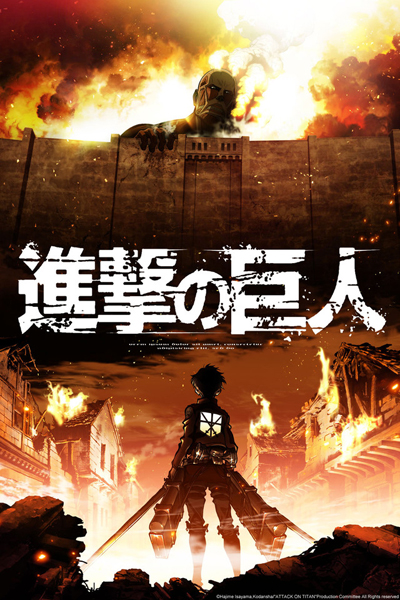 It is a very dramatic show, if you couldn't guess.

So a hundred years ago, these crazy humanoid giants called titans showed up and just started eating everybody and also were really hard to kill, so humanity was just seriously fucked.

That's a titan, they're fucking creepy.

Humanity in its infinite wisdom decided the only way to survive was to build a huge-ass multi-walled city to keep the titans out, and it worked! And everything was okay forever and peaceful and happy and ha ha ha ha

Yeah, no. A hundred years later a huge-ass titan knocked down the first two walls and humanity went right back to being fucked.

Anyway, what does a human society before the age of missiles come up with to kill giants whose only weak spot is the back of the neck?

The action is actually a really cool aspect of the story, if a little baffling to figure out at first. Plus, since the animation studio decided to put all its money in those sequences, it just looks really great.

Anyway, INSERT TRAGIC ORIGIN STORY and our protagonist Eren Jaeger starts training to become a soldier, and so do his similarly-tragic-origined friends Mikasa Ackerman and Armin Arlert. (Yeah, I know Arlert is a weird name. It's anime. You get used to it.)

From left to right: Armin, Eren, Mikasa, when they're kids.

And when the universe decides they don't get to be kids any more.

Eren is very angry and wants to KILL ALL THE TITANS. He does have good reason to be like that! The titans are pretty awful! But man does that boy have a lot of yelling in him.

In contrast, Mikasa is almost preternaturally composed. She's protective of Eren, though not so much that she won't let him get in any danger; she'll just follow him wherever he goes, when possible. She's also indisputably the best soldier in the new recruits and possibly one of the best soldiers ever, period. Girl gets things done.

If Mikasa is the muscle, Armin is the brains. Not that Eren and Mikasa are stupid, but Armin just notices things most people don't, and his on-the-spot strategies more than often save the day. He's physically weak, though, and sometimes he gets kinda freaked out. Some people dislike him for this. I will fucking fight them. 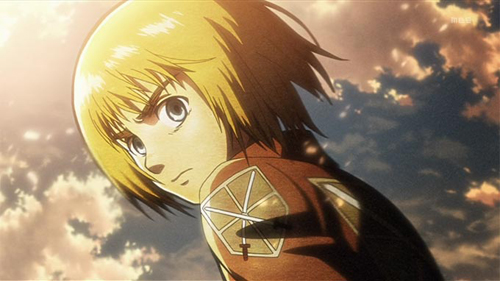 Left to right: Jean Kirchstein, fellow new recruit and mild asshole who starts out wanting to join the military so he can get a cushy position in the innermost city; Commander Erwin, leader of the portion of the military that goes into titan-occupied territory for scouting purposes and has a 90% fatality rate; Captain Levi, the most skilled soldier in the said portion of the military and total asshole; Hanji Zoe, resident overenthusiastic scientist who thinks studying the titans might be the key to learning how to finally defeat; Annie Leonhart, fellow new recruit who doesn't seem to care much about other people and has the same ambitions as Jean; Sasha Brouse, fellow new recruit who really likes eating; and Connie Springer, fellow new recruit who also initially had the same ambitions as Jean but is less annoying about it. There are other characters, but these are the ones who happened to have a convenient line-up I could find on Google, and TBH the others haven't done much in the anime...yet.

Another thing that is pretty great about Attack on Titan: the female characters are numerous, varied, and not even remotely sexualized at all. There is no fanservice to be found in this show. It passes the Bechdel Test pretty frequently. The manga casually reveals that at least two of the supporting characters are gay (one man, one woman; the woman arguably has a female love interest, but it hasn't quite gone there yet). And did I mention that the female characters aren't sexualized at all? They wear pretty much the same clothes as the guys, and there's barely any romance at all. Eren and Mikasa's deep connection seems purely platonic.

In fact, gender is hardly even mentioned. Male characters aren't stated to be masculine because of their fighting prowess, and while Armin is sometimes made fun of for not being physically strong, no one ever calls him girly or less manly than the others. Mikasa's strength is never remarked upon as being unusual for a woman. In almost all cases, changing the gender of any given character would result in no difference whatsoever. That's just pretty dang cool.

Here are some other pictures, because why not. 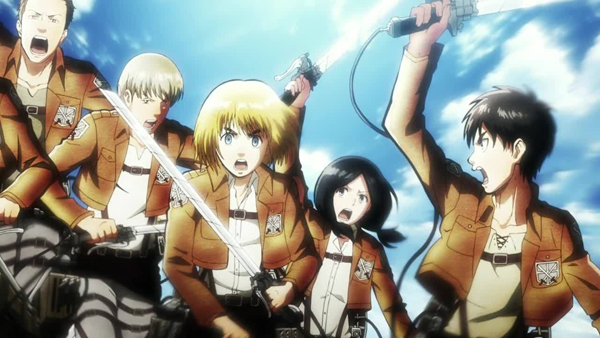 Of the ones I didn't mention, far left: Christa, total sweetheart; between Mikasa and Jean is Ymir, not a sweetheart; next to Jean is Marco, kind of a sweetheart; then Reiner and Bertholt, neither of them sweethearts but still okay dudes. 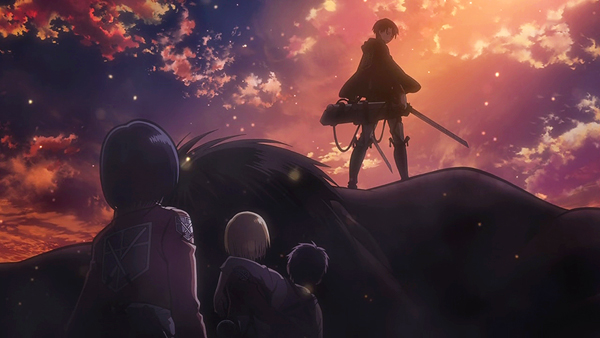 Levi has a talent for making an entrance. 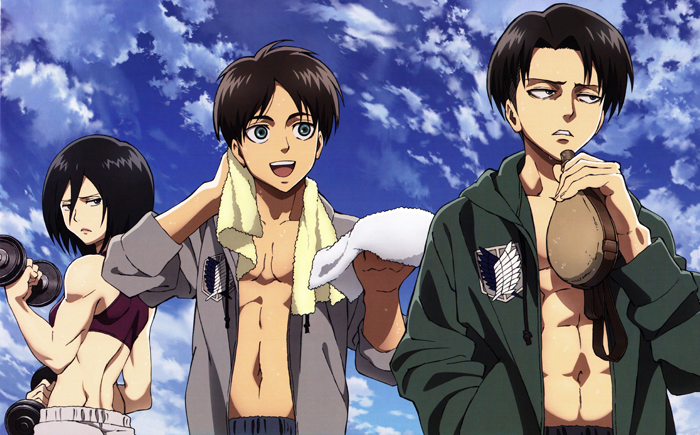 Gotta love Japan's tendency to do wildly AU magazine spreads! Also, Mikasa has a pretty good reason to not like Levi, let's put it that way. (It is the same reason Levi/Eren is the most popular slash pairing of the series. There's an out-of-context screenshot I'd love to put in here, but it's probably too spoilery.) 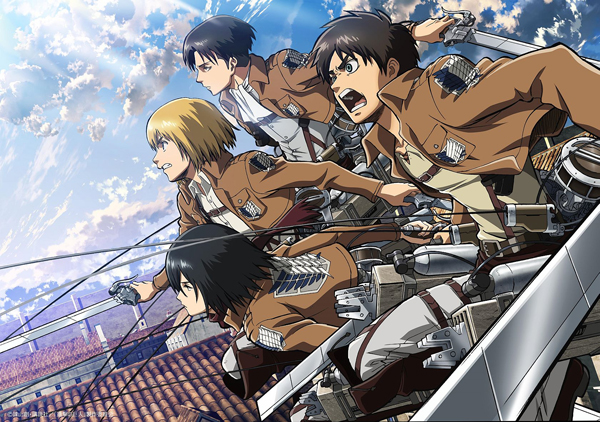 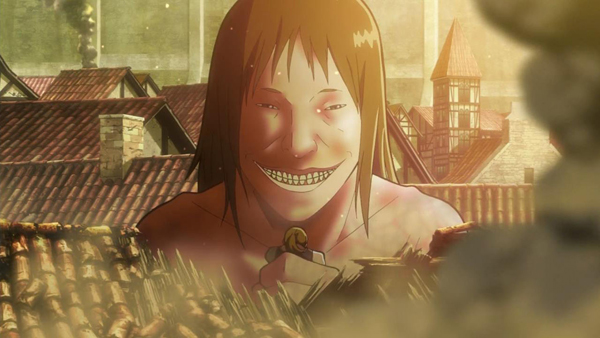 did I mention the titans are fucking creepy

In conclusion, it’s a pretty great show if you like crazy-ass movement sequences (grappling hooks and waist-mounted helium-powered jetpacks plus some serious parkour make for a hell of a way to get around) and people being eaten alive and traumatized teenagers and did I mention people being eaten alive I am not even kidding that happens a lot and it’s awful. It’s all very dramatic and depressing, and there’s a good chunk that will leave you very confused for a while, but it’s worth it, I swear.

You can watch most of it completely legitimately at Crunchyroll, and then once you realize you will have to be behind one episode every week for the rest of the series, you can watch it at other, easily-Googled places.

Anyway, that’s Attack on Titan! Go forth and be traumatized. The show is currently ongoing (18 out of 25 episodes), so you can be distressed in real time. There are certain episodes early on that I'm very glad I didn't have to wait week-by-week for; you will probably be able to figure out which ones.